6 Things You May Not Know About Virgin Hotels Las Vegas

Virgin Hotels Las Vegas will open its doors to the public on Thursday evening on the grounds of the old Hard Rock Hotel. The entire property has undergone a major renovation, which means many exciting new spaces and attractions for longtime Hard Rock fans and first-time visitors. Here are some of the things we noticed while touring the property before it opened.

The new resort’s decor is lighter and airier than the previous rock and roll theme, inspired by the drive through the desert to Las Vegas. The memorabilia that once greeted guests in the foyer of the main lobby have been replaced with silver, red, and black rock sculptures reminiscent of the Seven Magic Mountains art installation visible from Interstate 15. And instead of Britney’s school girl rock and all those rock star guitars, this lobby is now decked out with cacti, palms, and agave plants.

Echoes of the center bar

For nearly a quarter of a century, Hard Rock’s circular Center Bar was the place to see and be seen in Las Vegas. It’s gone today, but the vaulted ceiling above is still easily visible over an open area on the casino floor. In the past, the special acoustics made it possible for well-known guests to overhear people sitting on the opposite side of the bar. Today visitors walking under this dome (which is now decked out with a desert landscape scene on the edge) are likely to hear a cacophony of echoes and amplified voices. Science tells us that these are just the reflected sounds of other people in the building who are with us today. But if you listen really carefully, you can almost hear your favorite band relax after a set on The Joint. 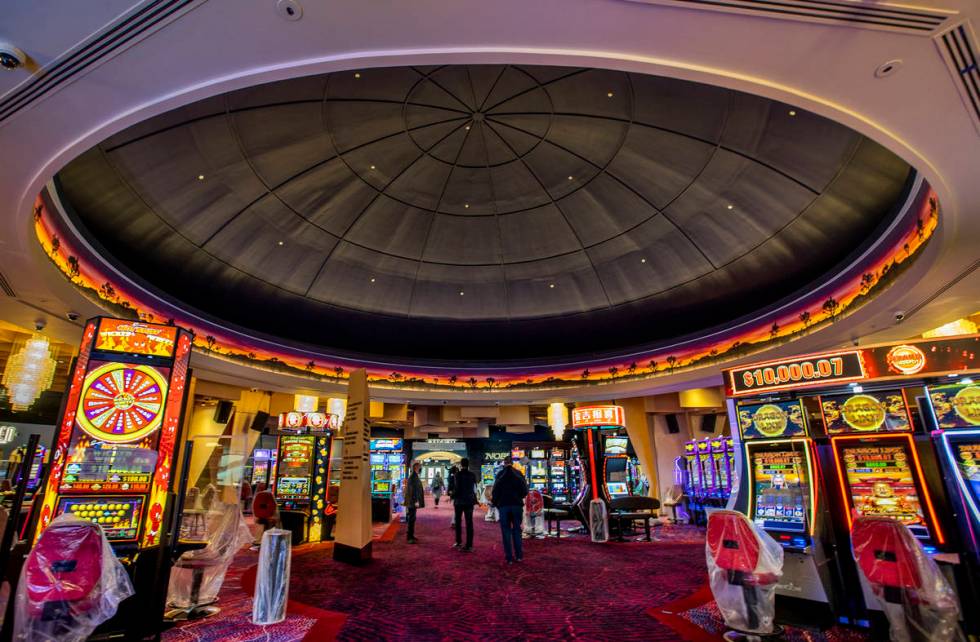 A dome on the casino floor of the Virgin Hotels in Las Vegas is the last remnant of Hard Rock’s old Center Bar. (LE Baskow / Las Vegas Review-Journal) @Left_Eye_Images

The Hard Rock’s original venue, the Joint, was demolished in 2009 to make way for a new casino and tower, and replaced with a larger Joint that hosted musical performances until the hotel closed its doors. This venue has been converted into a new, as-yet-unnamed theater, where artists will be welcomed as soon as they’re ready to hit the streets again. The renovations include new floors, seats and bar tops, VIP areas right on the concert floor, a redesigned lounge area on the second floor, and a bar on the third floor that has been relocated to allow for faster beer runs. As for the name, we may have to wait for someone to look for the naming rights in an American company.

If you visit a new casino and don’t post a selfie on the internet, did it really happen? There’s no need to find out as Virgin is full of great selfie spots. The hotel’s Día de los Muertos-style Mexican restaurant, Casa Calavera, is clearly hoping you will choose the massive skull throne they built outside the restaurant to commemorate your Instagram visit. And it’s a good place. But if you’re planning on visiting the restaurant, we recommend posing next to the larger, lighter-colored skull made of brightly colored marigolds in the entrance area. 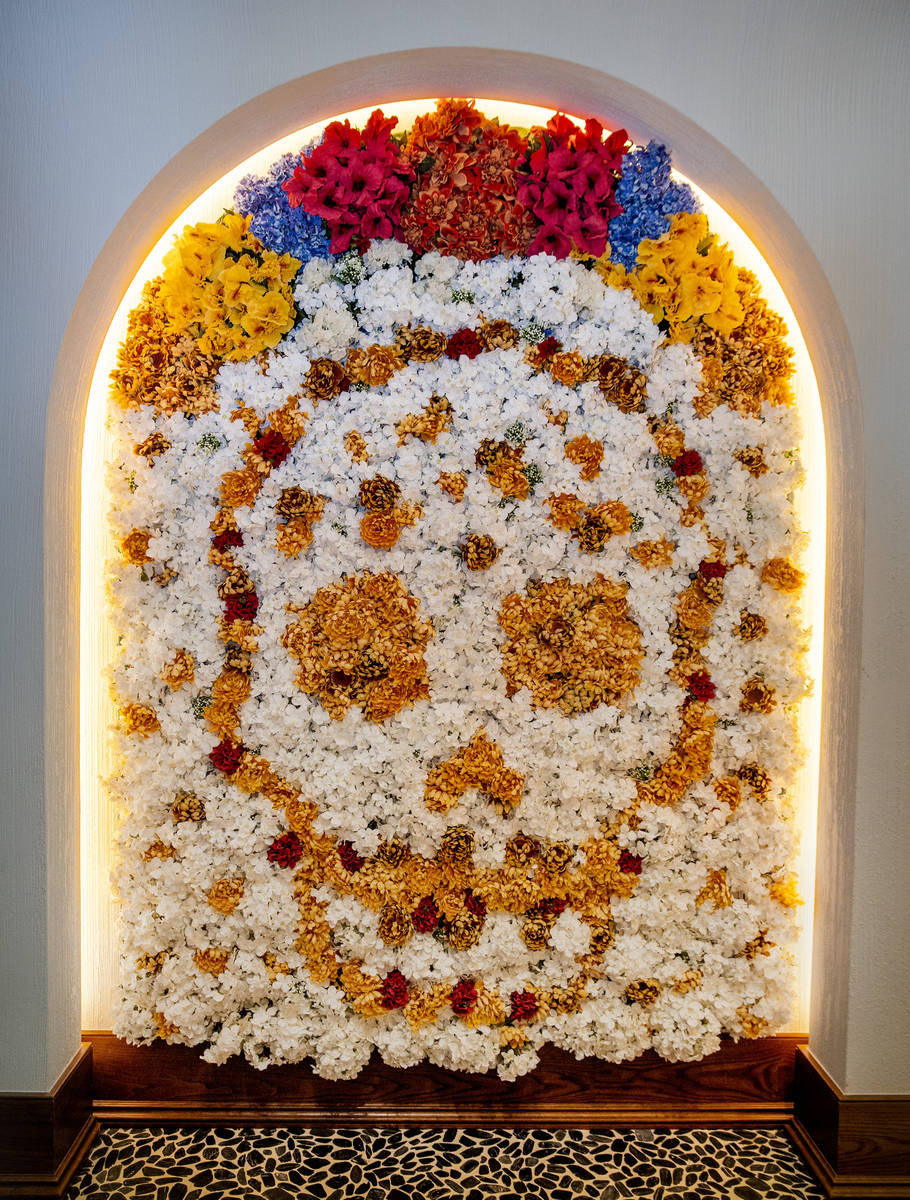 A skull made of flowers around the entrance of Casa Calavera in the newly designed and redesigned casino resort Virgin Hotels Las Vegas. (LE Baskow / Las Vegas Review-Journal) @Left_Eye_Images

“What happens here stays here” is a nice promise, but some of us still prefer a bit of privacy, especially in our hotel room. Virgin seems to get that, so they installed a door between the entryway and the master bedroom / sitting area of ​​each room. This allows a guest to say hello to room service or housekeeping at the door without disturbing others who may be changing, taking a nap on the Virgin branded bed, or doing something else they prefer privacy. 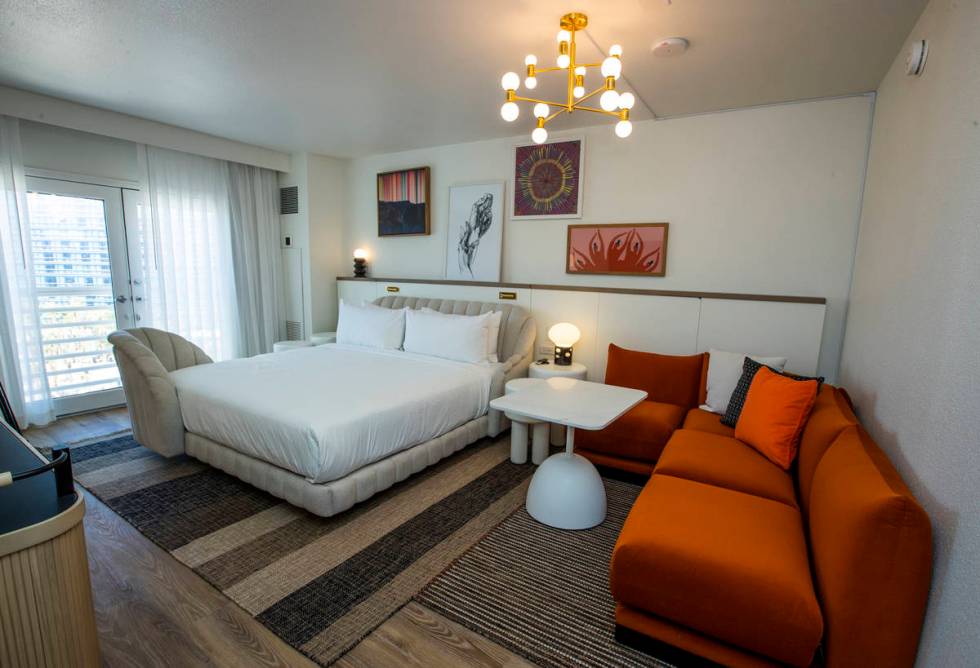 “We literally buried rehab,” Richard “Boz” Bosworth told the media ahead of a tour of Virgin earlier this month. He was referring to the famous Hard Rock pool party that single-handedly started the Las Vegas day club scene in 2004. And while Virgin will have a resort pool and day club called Elia, both slated to open in the spring, those looking to relive their rehab memories won’t be able to do it in their favorite cabana or even the same pool . The original rehab area is now under Virgin’s Event Lawn, a private outdoor area attached to the resort’s conference facilities. A piece of green artificial turf now marks the place of countless debauchery. 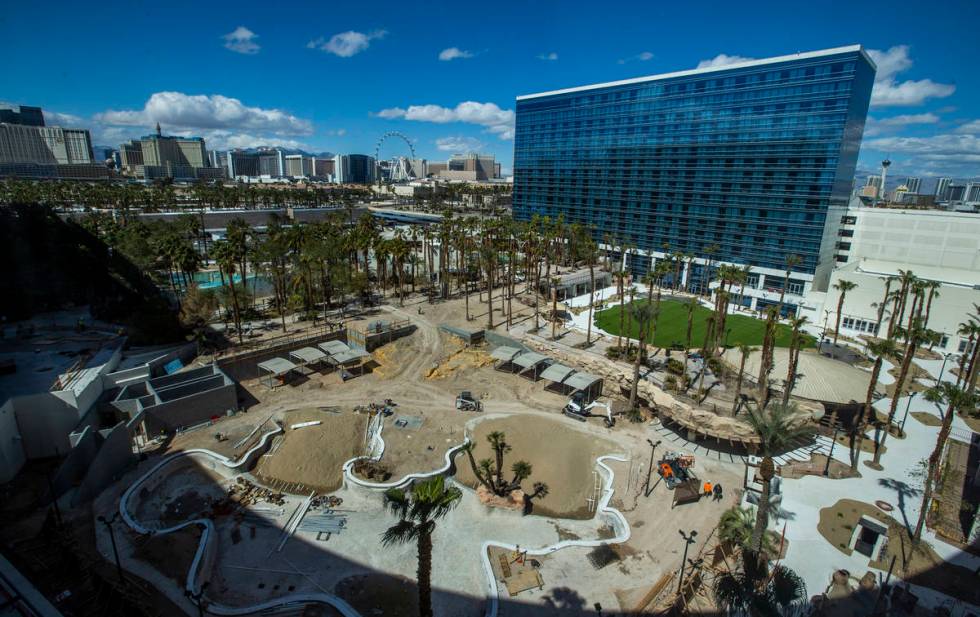 While pools are still under construction at Virgin Hotels Las Vegas, the old rehab area is buried under a piece of green lawn. (LE Baskow / Las Vegas Review-Journal) @Left_Eye_Images