Ann-Margret reflects on ‘Viva Las Vegas,’ visiting troops in Vietnam: ‘Being with them has been in my heart’

EXCLUSIVE: Ann-Margret was a Hollywood newcomer when she sang and danced her way to stardom in 1963’s “Bye Bye Birdie” – and she still manages to leave fans speechless decades later.

The 79-year-old recently attended the 24th Family Film Awards where she was honored with the Lifetime Achievement Award. The star, who was once billed as the female version of Elvis Presley, has carved out her own successful decades-long career. She has gone on to win five Golden Globes and has been nominated for two Academy Awards.

Ann-Margret spoke to Fox News about achieving fame, working alongside The King in “Viva Las Vegas,” heading to Vietnam to visit our troops, as well as her marriage to actor/producer Roger Smith.

‘HART TO HART’ STAR STEFANIE POWERS RECALLS HER RELATIONSHIP WITH WILLIAM HOLDEN: ‘WE WERE SOULMATES’

Fox News: How does it feel to be honored with a Lifetime Achievement Award at this point in your life?
Ann-Margret: Well, first of all, I feel so very blessed at this time in my life. Everything’s so exciting. But what can I say? I don’t expect anything. And when things like this come my way, I just feel so thankful. I’m so thankful. I feel truly blessed that I’m still being remembered.

Fox News: Julianne Hough did a performance in your honor. What did you think of it?
Ann-Margret: She’s amazing. She’s a triple threat. She sings, dances and acts. She’s a terrific lady and I enjoyed meeting her.

Fox News: What has kept you going as a performer?
Ann-Margret: Energy! I have so much energy. *laughs*. But ever since I was four years old, I wanted to be a performer. I was still in Sweden. My family, we all lived together under one house and we would harmonize all the time. We were a very musical family, always. So it has always felt very natural. And I would always perform any time we had people come over. When mother and I came to America, daddy had already come here about five years ago and it was during World War II. So of course, we had to wait because the war was going on.

‘40S CHILD STAR MARGARET O’BRIEN TALKS WORKING WITH JUDY GARLAND IN ‘MEET ME IN ST. LOUIS’: ‘I JUST LOVED HER’ 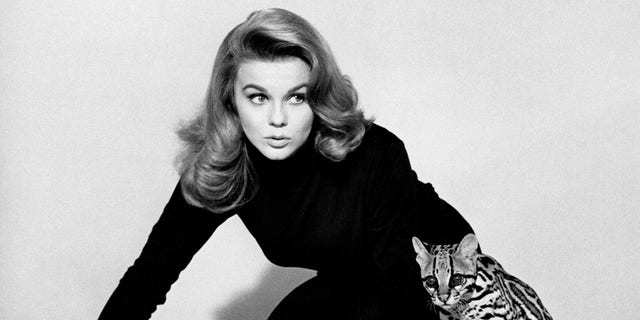 Swedish-American actress Ann-Margret poses with an ocelot in a promotional still for ‘Kitten With A Whip’, directed by Douglas Heyes, 1964.
(Photo by Silver Screen Collection/Getty Images)

Finally, daddy sent us tickets and we arrived outside of Chicago – Fox Lake, Illinois. I was six years old. I started school and I learned how to speak English very quickly. My mother learned from my aunts and uncles. So it took her a little while longer. But throughout that journey, our love of music never left us. And that love of performing has never left me.

Fox News: How nervous were you to take on the film “Bye Bye Birdie”?
Ann-Margret: Oh my goodness. I had no idea how much that film would change my life. I didn’t know what it all meant. I just kept working very hard at it and did my absolute best. And I loved it. I think it shows. I never want to know what’s going to happen to me in life. I want to be surprised.

Fox News: The film features so many screen legends. What was your relationship like with the cast?
Ann-Margret: It was great. My goodness. Bobby Rydell and I have remained friends this entire time. [My husband] Roger saw him perform in many places since then. He recently sent me his book and I learned about the trials and tribulations he went through. But that’s called life, right? He went through such awful things. He’s fine now and we’re still great friends. 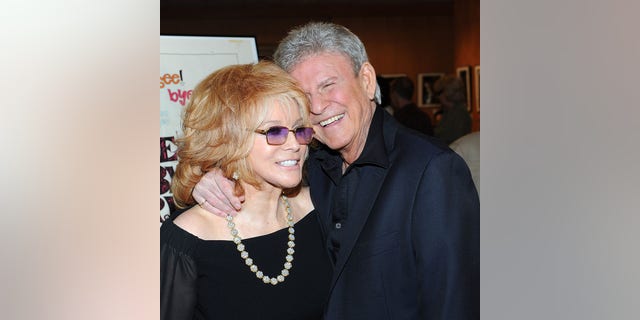 Fox News: When did you realize that you were famous? When did everything truly change for you?
Ann-Margret: It started changing immediately after “Bye Bye Birdie.” And during “Viva Las Vegas”. And by the time “Kitten with a Whip” came along, you just couldn’t deny it anymore! *laughs*.

Fox News: It’s been said that as soon as you became a star, you bought your parents a house.
Ann-Margret: I put it in their names, too. I was just so thrilled because they did everything in the world for me. Daddy was an electrician and mother was a housewife. But they did everything for me. They were very, very scared when I was going to Los Angeles because they’ve heard stories about Hollywood. I’m an only child and I was raised very strictly, but lovingly. They were just so scared that I would go with people who would hurt me. But that moment meant so much to me. I still get emotional when I think about it. 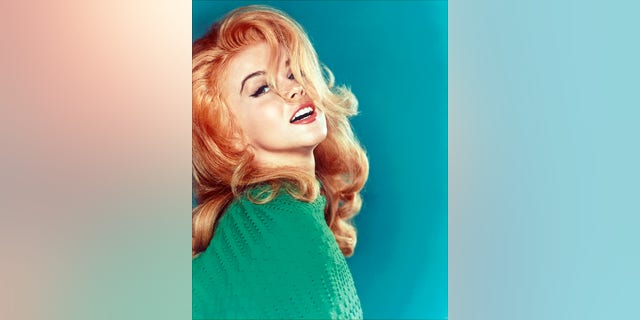 Fox News: You always appear effortless in your dance routines. Where did your confidence come from?
Ann-Margret: I’m glad it looks effortless *laughs*. Well, I absolutely loved it. When I was a little girl in Sweden, I came from a small village known as Valsjöbyn. I guess I’m the black sheep who decided to become a show business girl. 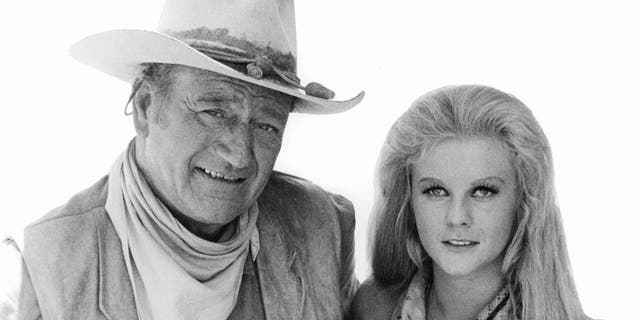 Fox News: You worked with John Wayne early on in your career. What surprised you the most about him?
Ann-Margret: Oh, I didn’t know what to expect. But when he hugged me, it’s like the world was hugging me. He was so big and wide with that booming voice. We were shooting in Durango, Mexico and my parents came down to visit me. He was so great with my parents. So absolutely welcoming and gentle with them. And anybody who was great to my parents was on a throne in my eyes. I was friends with him forever. He was never [pretentious]. He had so many friends and every single person loved him.

Fox News: What’s one memory from your time filming “Viva Las Vegas” and working with Elvis Presley that makes you smile today?
Ann-Margret: Just thinking about “Viva Las Vegas,” or anytime someone mentions it, I smile. It was one of the happiest times of my life. George Sidney, who directed “Bye Bye Birdie” also directed “Viva Las Vegas.” And believe it or not, I had never seen E.P. perform.

I know that’s hard to believe but I hadn’t! I really got to see it when we were rehearsing, singing and dancing with each other. But we moved very much the same. And he loved his mother. I loved my mother and father. I had a great time. We were friends ‘till the end. I had a great time. 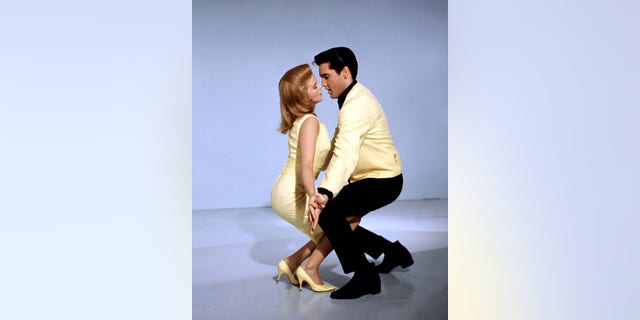 Fox News: One of the most important moments of your career was when you went to Vietnam. How much of an impact did meeting those troops have on you?
Ann-Margret: It still has an impact on me to this day. I went in 1966 and 1968. I had gotten a long letter from G.I.s who wanted me to come over and see them. And of course, I wanted to go over the next day! But I had to wait. But I still have all the notes and letters I received from so many gentlemen. And ladies, too. Being with them has been in my heart the entire time and it will never, ever leave my heart. Never.

Fox News: What’s one moment with a soldier during your visit that left a lasting impression on you?
Ann-Margret: I remember I went to the hospitals and saw those babies. We were all in the same age group. But when I saw them, I just cried and cried. I’m not a doctor. I’m not a nurse. All I could do was perform for them. With every performance I did, I was expressing my love for each and every one of them.

KIM NOVAK EXPLAINS WHY SHE LEFT HOLLYWOOD: ‘I FELT LIKE I WAS LOSING MYSELF’ 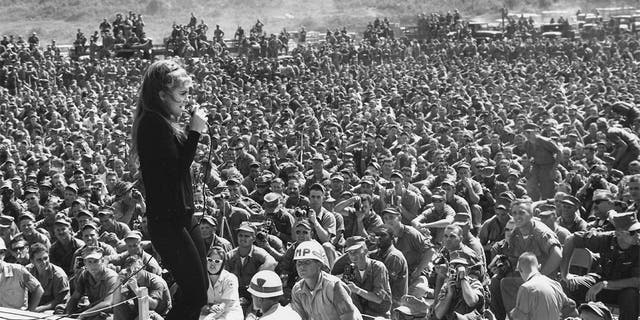 Thousands of service personnel listen to Ann-Margret sing one of her numbers during a show in Vietnam, circa 1966.
(Photo by PhotoQuest/Getty Images)

I went to an event in Las Vegas not too long ago and there were two gentlemen from Vietnam. It felt wonderful to hug them, kiss them and just talk to them. I’m so thrilled that they’re here on American soil. I’m an emotional person. It’s just so hard for me to put into words what I feel for those men and women. That will never go away. And I will always love them. That will never leave me, no way. When those G.I.’s wrote to me, I really wanted to go the next day. But they’re in my heart. 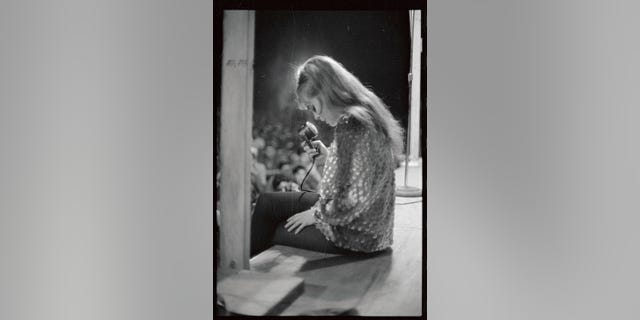 Ann-Margret at a U.S. base in Vietnam.
(Getty Images)

Fox News: Looking back at your career, do you have any regrets? Is there something you wish you could have done differently?
Ann-Margret: Hmm, you know, whenever I see my movies, I usually see them in a screening room. I see it one time and that’s it. You can ask my friends. I just see them one time and that’s it. But no. I did the best that I could at the time and then it’s over. You always think, “I hope it works. I hope people are entertained.” But sometimes it doesn’t work.  But you keep at it if you really love it.

Fox News: You’re still recognized as a sex symbol. How do you feel about the title?
Ann-Margret: What can I say? I think it’s wonderful. I love it. I feel very happy that somebody sees me that way. It’s in the eye of the beholder. So that’s very, very nice. 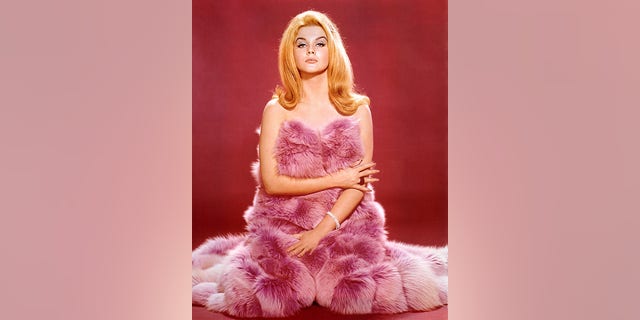 Fox News: What’s life like for you today?
Ann-Margret: I’m living in the same house that Roger and I bought in 1968. I have three step-children and we raised them here. One of them passed away a month after Roger passed away. Roger and I were married 50 years. Count them, 5-0. We still would have been married except he became very sick and passed away in 2017. We had just had our 50th anniversary. Big, big party. And every room here in this house is just him and I.

MOTHER DOLORES HART EXPLAINS WHY SHE LEFT HOLLYWOOD TO BECOME A NUN: ‘GOD CALLED ME’ 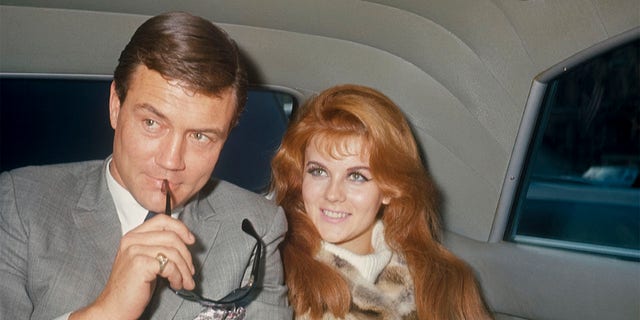 Roger Smith and Ann-Margret in the back of a limo; circa 1970; New York.
(Photo by Art Zelin/Getty Images)

Fox News: What was the secret behind such a lasting marriage?
Ann-Margret: We both wanted it to work. You can’t have one person bending over backward to make it work. Both of you have to want it. And we both did. Roger wanted to live so badly. He just kept coming back and coming back. But it was just too much [in the end]. It was an incredible marriage. 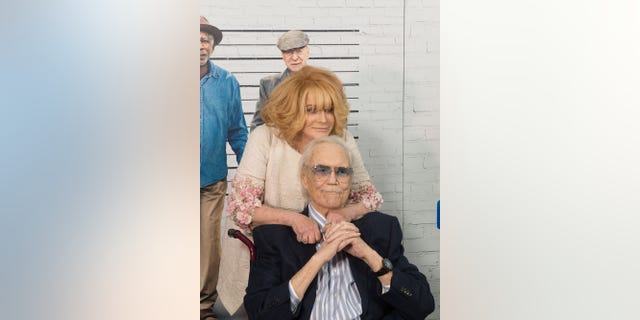 Fox News: What do you hope people will get from your journey to Hollywood?
Ann-Margret: Here’s the thing. I have always been passionate about performing. I did a screen test at 20th Century Fox where they just had me singing and dancing. Next thing you know they bleached my hair orange and I went on from there! You have to be really passionate about your work, whatever it is. Whatever your work is, you do the very best that you can. You could have a lot of nos, but if you’re passionate about it, you just keep on doing it.

The tea, bar and restaurant industries are coming together in Las Vegas this summer