Imagine planning a huge music festival, canceling it, and then planning it again without knowing if all you have to do is cancel it again. That was the routine for the organizers of Life Is Beautiful last year when the pandemic devastated live entertainment around the world.

“We have a mentality installed within the team, this mantra: ‘Make a plan, break a plan, make a new plan,” LIB partner Justin Less tells the weekly.

“We felt an increased sense of responsibility towards our community and knew how important this would be in a city that relied so heavily on entertainment and live events to increase household incomes,” continued Less. “So we always wanted to be ready for the moment the COVID started to break out and the timing was right so we could send a signal to the rest of the world that Las Vegas was back and open for business and for you to travel again to Vegas to plan. “

For those thinking of visiting Life Is Beautiful in 2021, today brings big news in the form of a music series of more than 60 acts that will be performing on the festival street stages in downtown Las Vegas from September 17th to 19th becomes. After last week’s sold out early bird ticket offer, the rest of the passes for the eighth edition of LIB – and the first since 2019 – will go on sale on March 12 at 10 a.m. Vegas time on lifeisbeautiful.com. Prices start at $ 330 plus taxes and fees.

The top of this year’s bill is eye-catching and diverse: the singer-songwriter Billie Eilish, who won the top awards at the 2020 Grammys (song, record, album and new artist); Pop-punk favorite Green Day, who was inducted into the Rock and Roll Hall of Fame in 2015; Aussie group Tame Impala, which combines psychedelic rock and dancey pop; and rapper A $ AP Rocky, whose three albums are listed in Billboard’s Top 5 and who has an average of 17 million monthly listeners on Spotify.

From there, the lineup moves across the musical map, collecting popular electronic artists like Illenium, Fisher, and Dillon Francis. enduring rock-oriented acts like St. Vincent, Modest Mouse, Haim, and Death From Above 1979; and acclaimed hip-hop names like EarthGang, Young Thug, and Ludacris. 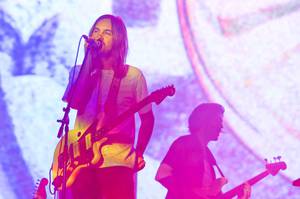 According to Less, around 75% of the bill has changed since LIB booked its never-released lineup for 2020. This will allow the festival to better reflect not only evolving tastes, but also the different ways audiences have received music since the pandemic began.

“We wanted to make sure we were doing something that was relevant to the time,” he says. “Through Instagram Live, and more recently through larger, scaled-up livestream productions, artists have begun to develop a much stronger one-on-one relationship with their fans. So we looked at this to see what was trending. “

The participants for the other LIB tines – food, art, comedy, and ideas – will be announced in the coming months.

Speaking of concerns that COVID-19 numbers, which have been falling in recent weeks, could rise again and sink the festival for a second year, Less says his team will continue to think positively but plan all eventualities.

“It’s more likely that anyone who wants to get the vaccine can get it if we fall. So we’re pretty optimistic that we’re in a much more open environment,” says Less. “But we are also very careful with security practices while planning multiple scenarios. And if we ever couldn’t guarantee that we could create a safe environment, we would of course refund all tickets immediately. We would never risk the safety of our guests. “

In addition to the pandemic-time logs, the 2021 edition of Life Is Beautiful will feel different for another reason: the absence of longtime supporter Tony Hsieh, who passed away in November. Less says attendees should expect this year’s festival to honor Hsieh’s legacy.

“The best gifts Tony gave us were a belief in bold thinking and a strong desire to shift the perspective from the problems within a community to the possibilities of that community,” says Less. “It took us from a small local festival to something that is internationally recognized and successful.”